SCROLL TO THE BOTTOM FOR UPDATED COVID19 INFORMATION

To have the musical comedy “Company Matters” performed all over the world, and in all of the major cities in the USA. A tall order perhaps, but better to dream big than small. Also there are opportunities to use the topics covered as aids to teaching business ethics and morality in High Schools and Universities.

We also envision the musical being performed as part of cross cultural exchanges and I’d like to see experimental theater groups perform this with an all female cast.

Technology is mentioned in the musical and there’s a Rap song near the end called “Boot Up Rap” In the mid 1990’s I gave a class on basic computer technology to inner city kids in the main Sony Music building on Madison Avenue. The company graciously supported me and we ran the program for about 18 months.

With certain profits from the show, I would like to set up a similar program across the USA so that computer folks and technologists can teach young at risk kids the basic science of computer technology and hopefully interest them in the topic for a career.

Finally I would like to support more egalitarian forms of businesses, similar to those described by Richard Wolff Professor of Economics UMASS.

COVID19 information – updated on a regular basis, MAY 1 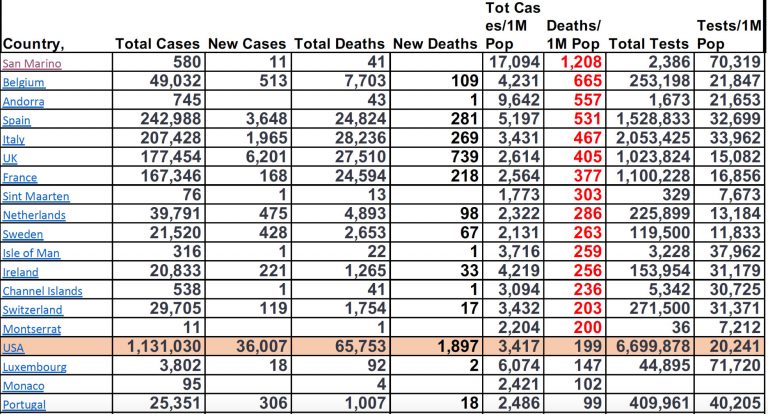 These are the COVID19 statistics for May 1 2020. This data is an extract of the full list, highlighting the deaths per million head of population. I will update this information on a regular basis, because “Company Matters” and each person each new case each new death is more than “a number on a spreadsheet”. Stay safe everyone.